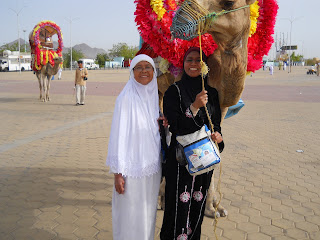 This is my favourite photo of my mum and my lovely daughter Khadijah during our umrah trip last July. By Allah's will we spent two weeks of blissful moment in Mecca and Madinah. It was really unexpected as we never planned it. Dijah asked me if I would like to accompany her and I asked my mum if she would like to join us. The rest is Allah's mercy!

It was mid-semester break in March 2011 and my mum was lying down at home after a major operation.  A few weeks back we sent her for treatment at KPJ hospital  where she was warded for 3 days for severe stomach pain. After she got home, she was still in pain. My son suggested that we went to the Emergency Dept at Raja Permaisuri Bainun Hospital and  a few days later she had an operation. She recovered well and  I am really glad that she was strong  enough to perform umrah with us. While in the holy cities, she woke up as early as half past two in  the morning!

Congratulations to thousands of Malaysians who are chosen by Allah to be His guests to perform Hajj  this year. It is indeed an honour and let's pray hard  so that one day we will be in Mecca and Madinah once again.